The Single Transferable Vote has arrived. What does this mean for the Labour Left?

Earlier this week, the Labour Party's National Executive Committee (NEC) voted in favour of changing the way in which Constituency Labour Party (CLP) reps on the NEC are elected. In this summer's elections, the Single Transferable Vote (STV) will be used for the first time to elect the 9 CLP reps on the NEC.

In this article I'll look at what STV is, what it means for the election, and discuss what the Labour Left's strategy should be.


We should not be relaxed or complacent about these elections, because if we fail to adjust our strategy to account for the new electoral system, there is a serious chance of us winning no seats on the NEC whatsoever.

What system have we been using?

Prior to 2020, the CLP reps on the Labour Party NEC were elected using a system known as the "Bloc Vote". Under this system, which is used to elect many local councillors in England and Wales, voters have as many votes as there are positions to be filled: so in the case of the NEC, members would cast 9 votes for 9 different candidates. The 9 candidates who recieve the most votes would then win.

However, whilst AV is used to elect individual positions (like a Leader) STV is instead used to elect multiple positions at once - in this instance, to elect 9 NEC members at the same time.

Instead of needing over 50% of the votes to win, like with AV, candidates in an STV election must win a minimum number of votes in order to be elected - this is known as the 'quota' . In most cases, this quota is calculated by looking at the total number of first preference votes, then dividing it by the number of available seats, plus 1.

If 9 candidates all win the minimum number of votes solely from first preferences (in this case, 30,433) then they are all elected. However, if this does not happen, then voters preferences are redistributed until 9 people do win the necessary number of votes. This is done through redistributing the votes of candidates who came last in each round of counting, and also through redistributing the votes of candidates who have already won - though votes for candidates who have already won are weighted at a smaller value to ensure that their vote does not count twice.

If this seems complicated, that's because it absolutely is. There are countless ways to count STV. For more information check out the Electoral Reform Society's briefing.

STV is used to elect local councillors in Scotland and Northern Ireland, as well as to elect the Northern Ireland Assembly. The Republic of Ireland also uses it for local, general and European elections.

What does this mean for the NEC elections?

In short, switching to STV means that a faction won't be able to win all of the seats simply by winning 31% of the popular vote (as the Labour Right did in the 2020 by-elections).

However, this does not mean that the Labour Left doesn't have to worry about splitting the vote.

What does this mean for the Labour Left?

In the 2020 NEC by-elections, there were at least three different leftwing slates standing 5 different candidates. This meant that there were 5 leftwing candidates running for just 2 places on the NEC, and the Left vote was split.

Lots of leftwingers have been arguing that this is no longer a problem, as STV allows members to transfer their vote to another leftwing candidate if their preferred candidate doesn't win. Lots of leftists now seem relaxed about the possibility that multiple leftwing factions could all run 9 candidates of their own for the 9 positions. But this would be an absolutely catastrophic mistake.

Contrary to popular belief, STV does not prevent vote splitting - it simply makes it more complicated. Let's say that 40 candidates stand for the 9 CLP places on the NEC:

With 9 seats up for election, the quota would be around 10% of votes cast.

Why does this matter, you ask? After all, won't most of the leftwing members have given their 2nd preference to other leftists? Well, maybe. But even if they did, the sheer number of leftwing candidates splitting the vote would mean that most (if not all) would poll fewer first preferences than the dozens of independents, soft left candidates and other candidates that we can expect to stand.

As a result, those leftwing candidates would be among the first to be eliminated when preferences from more unpopular candidates start to be redistributed. And so they won't benefit from any second or third preferences later on - because they'll already have lost.

Here's an example that helps to illustrate this. As stated above, Ireland uses STV in general elections. In the 2011 Irish general election, the results in the 5-seat constituency of Wicklow were: 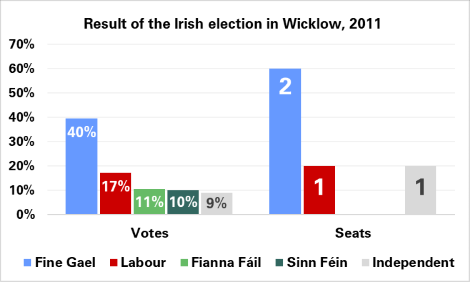 As you can see in the linked results, despite Fianna Fail (11%) winning more first preference votes than Sinn Fein (10%) and the most popular independent (9%), both Fianna Fail candidates were eliminated before they had the chance to win any seats, and the final seat came down to a contest between the Independent candidate and the Sinn Fein candidate (with the Independent winning by 112 votes). 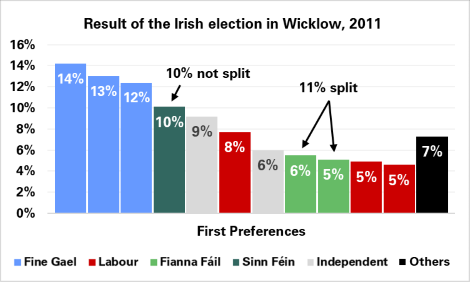 Ah, but you might say - would this happen to the left? Wouldn't any Left voters just transfer their votes to other leftwing candidates? Well... maybe. Maybe not. And that "maybe" can make all the difference.

In the 2011 Irish general election, the results in the 3-seat constituency of Cork South-West were: 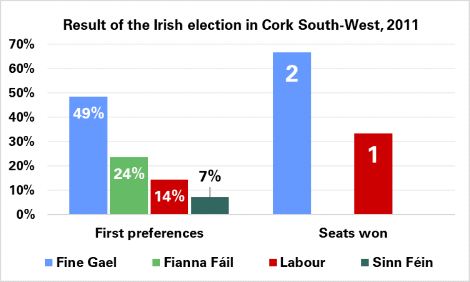 Proportionally speaking, you'd expect Fine Gael to win 2 of the 3 seats (which they did) and Fianna Fail to win the remaining seat. But instead, Labour won the third seat, and despite winning 24% of the popular vote in that constituency, Fianna Fail won no seats at all.

Why did this happen? It happened because Fianna Fail stood two candidates who won 13% and 11% of the vote respectively, as opposed to Labour who stood only one (winning 14%). This meant that, although most Fianna Fail voters transferred their vote to the other Fianna Fail candidate, not all of them did - so despite polling a joint 10,787 votes on first preferences, the most popular Fianna Fail candidate won just 10,155 votes in the final round, losing to Labour by a very small margin. 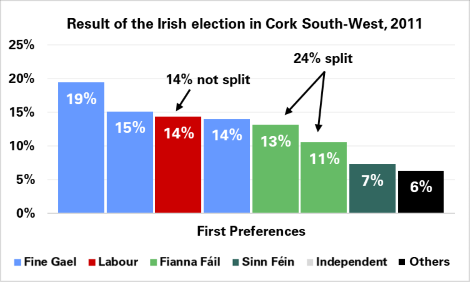 Had Fianna Fail only stood one candidate, that candidate would have won 24% of the vote in their own right, topping the poll and almost certainly reaching the quota of 25% before anybody else. And, most importantly, that candidate - even if they had attracted no 2nd preferences - would have had more votes in the final round (10,787) than the Labour candidate (10,754).

So in the event, despite Ireland being very used to STV, enough voters failed to transfer their vote to another candidate from the same party to cost that party a seat.

Are we really confident that Labour members, who have never used STV to elect the NEC before, will be even more consistent at transferring their votes between dozens and dozens of leftwing candidates than an Irish electorate who have been using STV for 99 years?

The Labour Right have immediately recognised the differences in using STV for these elections. Having stood a full slate of candidates in every election under Corbyn (with the exception of some by-elections in 2017), they are only standing 6 candidates for the 9 places in 2020. They clearly understand that in a somewhat-proportional election, they cannot expect to win 9 out of 9 seats with the support of just 30-35% of voters.

The Left has to understand this too. Charlie Mansell estimates that the Left can rely on the support of around 40% of voters in these NEC elections, which would proportionally entitle us to 3-4 seats out of 9.

If that 40% vote share is split between 20-25 leftwing candidates, then the overwhelming majority of leftwing candidates will be eliminated very early after winning less than 1% of first preferences. We would then have to rely on this sizeable and diverse group of voters to rally their preferences behind 3-4 candidates without being told who they are in advance or being asked to do so. That is a difficult task for an electorate that has been using STV for decades, as in Ireland - for an electorate that is using it for the first time, it's nearly impossible.

So what should we do?

My preference is simple: the Labour Left should only stand a united, 5-candidate slate for the 9 places. In the most friendly circumstances, we could only hope to win 5 of the 9 seats (55%) - anything more is simply out of our reach.

At the same time, the Left should make it clear when campaigning for this slate that voters need to preference ALL of the Left's candidates. It doesn't particularly matter what order they preference them in - but they do need to rank ALL of them from 1 to 5.

There are three reasons for why we should do this:


1) Having just 5 candidates would make it clear who leftwing members should vote for, especially given that members will have an enormous number of candidates to choose from

2) Having just 5 candidates will minimise the chance of Left candidates being eliminated in the first few rounds of counting, and give them more of a chance to benefit from second and third preferences

3) Standing multiple slates with lots of different leftwing candidates will discourage voters from giving their 2nd/3rd/4th preference to other leftwing candidates, which they absolutely need to do if we are to win seats on the NEC


This may not be what happens. But I hope that this article contributes to the debate and informs folks about the nature of the Single Transferable Vote.
Posted by Stats for Lefties at 16:40 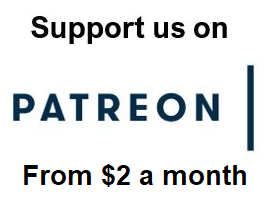 A polling and elections blog that takes a leftwing perspective on British politics.
Supporter of the Labour Party, the Socialist Campaign Group and democratic socialism.
Contact
Email: statsforlefties@gmail.com
Twitter: @LeftieStats